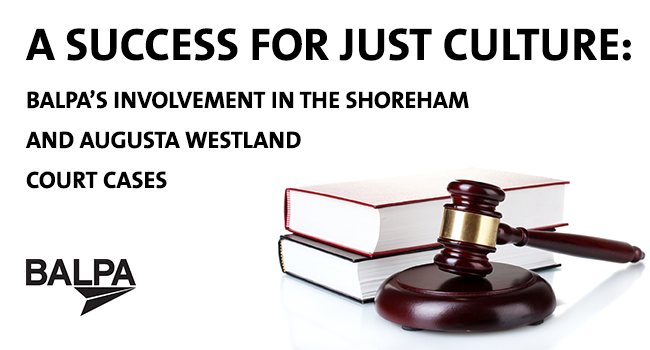 The High Court has today issued a judgement preventing the disclosure to the police of a range of AAIB investigation materials in the Shoreham air show crash of August 2015. This is a major milestone in our continuous journey to protect flight safety. BALPA intervened in this case on behalf of our members because of the serious and far-reaching implications for just culture and the integrity of air accident investigations. We are very pleased with how the court responded to our concerns.

For several years now, aviation professionals have been concerned about the number of aviation accidents being litigated in the criminal and civil courts. This has presented, in our view, a real threat to the just safety culture which we know does so much to protect and improve flight safety. It was clear from an early stage that the Shoreham case, and a similar case relating to an Augusta Westland helicopter crash in March 2014, would be important legal cases and BALPA took the decision to intervene in both.

BALPA’s legal committee co-ordinated experts from across the Association along with individual members with experience of AAIB investigations, and our colleagues at the ECA and IFALPA, to lay before the court compelling evidence of the damage that would be done to flight safety by the further erosion of just culture. We instructed leading lawyers to attend the two-day hearing before the Lord Chief Justice in July to argue for the protection of flight safety.

In the Shoreham case, the police made an application to the High Court for access to certain items of AAIB working materials. In particular, the police asked for disclosure of the AAIB’s notes of witness interviews. They also asked for film footage from two cameras the pilot had placed inside the cockpit.

The judges refused to order disclosure of the witness interview notes. They ruled that it is ‘almost inconceivable’ that the court would ever order disclosure of statements made to the AAIB. They said that disclosure would have a ‘serious and obvious chilling effect’ which would tend to deter people from answering AAIB inspectors’ questions with the necessary candour and that this would ‘seriously hamper’ future investigations and the protection of the public. The Court also stated that it would be unfair to require such disclosure given the AAIB’s powers to obtain answers to questions by compulsion.

However, the judges did order disclosure of the film footage but, in doing so, they emphasised that this was not mandatory CVFDR data but footage from cameras which had been voluntarily installed for private leisure and commercial purposes. It is not, therefore, a ruling that CVFDR data can be disclosed.

In the Augusta Westland helicopter case, the coroner had ordered that the CVFDR information be disclosed to her. The coroner’s power to do this was challenged by way of a judicial review.

The judges ruled that coroners do not have the power to order the disclosure of AAIB investigation materials. The only court which can make any such order is the High Court. Plus, in an important legal development, the Lord Chief Justice ruled that, unless there is credible evidence that the AAIB’s investigation is incomplete, flawed, or deficient, coroners should simply accept the AAIB’s conclusions, should not re-open the matter and should regard the cause of the accident as outside the scope of the inquest.

These two judgments are a major milestone in the journey to protect flight safety. They have now set the law in England and Wales and they are likely to be highly influential in courts all around the world as they specifically consider European legislation. The court has prioritised the importance of protecting the just safety culture and the integrity of air accident investigations above the need to investigate blame. Those answering AAIB inspectors’ questions can now do so knowing that the law says that it is ‘almost inconceivable’ that their interview records would be disclosed to the police or a prosecutor.

As pilots, we know that this is not about stopping investigations – far from it. This is about making sure that the accident investigation process is robust, free from interference from outside agencies, and maintains its culture of finding the cause, preventing reoccurence, and not assigning blame. This means pilots can continue to have the utmost respect and confidence in the AAIB’s processes. These judgments would not have happened but for BALPA’s direct involvement. No other party supplied the breadth of evidence that BALPA did to the Court to assist in reaching a considered decision. As the voice of Britain’s pilots, we will continue to do everything we can to protect flight safety and to make every flight a safe flight.